Karina talks about the roots of the Berlin queer scene and the alternative sounds she’s currently championing.

Described as the utopian club night where techno meets whips and chains in Berlin’s KitKat club, the Gegen crew return to head up our Berlin Berlin: Pride Special on Saturday July 6th. Here we get to know their dark core techno resident DJ Karina Qanir ahead of her debut set at Egg LDN and flanked by special guest and vinyl aficionado Bloody Mary and Mar/Us. Karina talks about the roots of the Berlin queer scene and the alternative sounds she’s currently championing. Check out her recent mix on the Berlin Berlin Soundcloud. 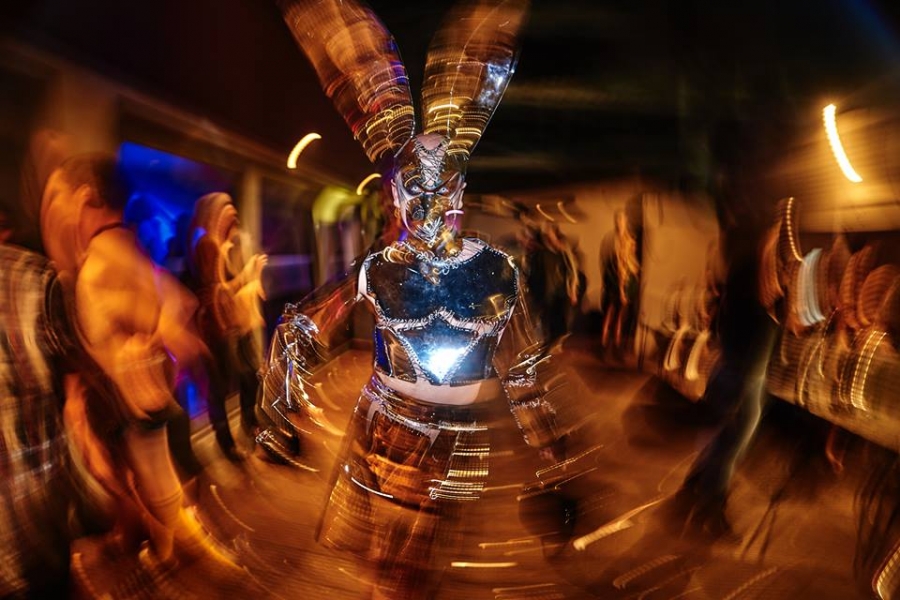 Our Berlin Berlin Pride special is all about celebrating the LGBTQ+ community and the finest talent from Berlin’s electronic circuit. You’re living in Berlin at the moment, what have been the most memorable parties you’ve played at so far which celebrate and encourage the LGBTQ+ community to come together?

When I played at the Berlin Pride parade for the first time in 2000 it surely was a big thing for me. Until then I had only played at smaller queer events so playing for a bigger audience felt quite special. And then there was this party called ‘Sab°tage’ which was kind of the predecessor of Gegen. I think ‘Sab°tage’ was one of the first real queer underground techno parties in Berlin, and for me personally, a lot of important stuff had its start there.

You’ll be playing on the Gegen floor, for those unfamiliar with Gegen, how would you describe the sound and vision of the collective?

To me Gegen feels like some kind of queer utopia and a celebration of true diversity. It’s a place where we all can free ourselves from all normativity.

What about your own sound as an artist, how would you describe what you are sonically all about?

I always find it a bit difficult to explain my sound with words. But I guess I’m aiming for a sound that is dark, drifty, hypnotic, euphoric and ecstatic.

Are there any particular local artists in Berlin who are not fully established yet but have caught your attention lately?

I’d like to support my long time friend Exildiscount who will be releasing his first EP on Reveller Records on July 10th. Although our styles are somewhat different our understanding of what makes a DJ set or music in general meaningful is very similar. We have been sharing the DJ booth every now and then for almost 15 years now so we kind of grew up together, artistically.

Leave us with a track you’re looking forward to playing for us on 6th July?

Resident to Gegen Berlin, Karina Qanir will be joining Berlin Berlin on the Middle Floor on Saturday 6th July for our Pride Special! Click here for tickets.