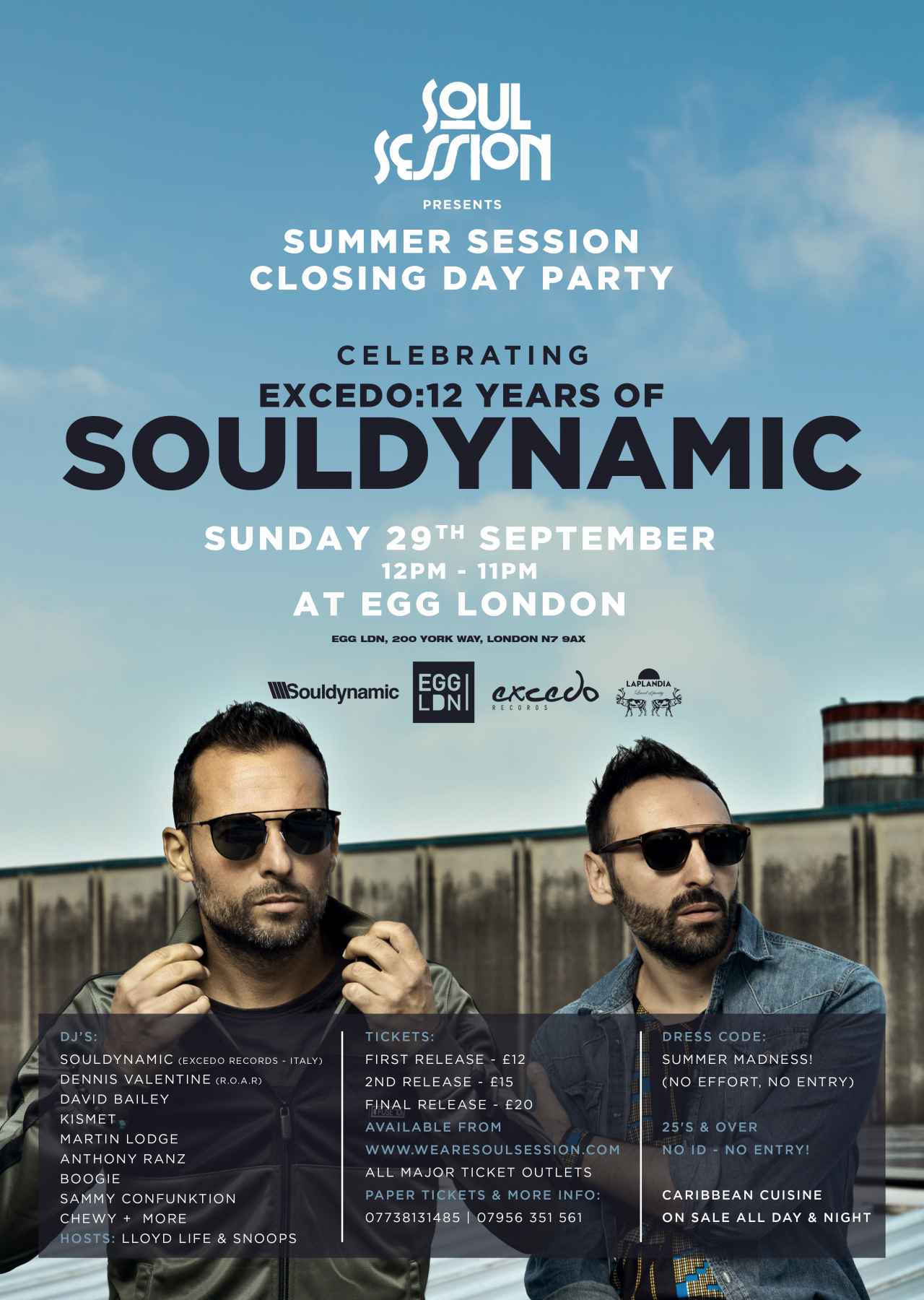 Hailed for its friendly family groove and keen booking policy that showcases interesting Producers & DJs who are carving out their own niche, Soul Session closes out the sunny season with its Summer Closing Day Party helmed by leading Italian house duo, Souldynamic on Sunday September 29th. From the caribbean cuisine being served all day to the daytime party sounds tracked by an allstar cast of London’s finest DJs from the house scene including Dennis Valentine, David Bailey, Martin Lodge, Anthony Ranz, Boogie, Chewy with hosts Lloyd Life and MC Snoops flanking Souldynamic who celebrate their 12th Anniversary.

The Soul Sessions journey continues in the melting pot of clubland’s Egg LDN which encompasses some great outside space to backdrop their solid music foundation and great crowd interaction. An organic let it flow ethos has seen SS evolve into one of London’s leading innovators in the underground dance scene that really does reflect the city’s working radio and clubland DJs.

Sunday September 29th sees the Italian duo Souldynamic take centre stage and who are best known for their single “Equatoriale” (racking up over 2.5 millions views online) which reached #1 in the download chart, after first being played by the legendary Chicago DJ & artist, Lil Louis at Concrete in Paris.

In 2016 the guys performed their first Boiler Room set at the Neuhm party in Naples - stoked to be one the few Italian electronic artists to be asked. The duo have also cemented their reputation on the world stage with impressive shows at European festivals and clubs, including Southport Weekender Festival (UK), Suncebeat Festival (Croatia), Cavo Paradiso (Mykonos), Baut (Amsterdam), Kube (Casablanca), Lanificio 159 (Rome) and Duel Beat (Naples).

Driven by a true and deep passion for real underground house music Souldynamic will be Premiering some Exclusive new cuts in their set.

Now in its 9th year, Soul Session’s vibrant parties are hailed as a platform for London’s working and up and coming DJ talents joined by an occasional Guest DJ. Established as one of London clubland bastions of soulful house since its Launch party with US Legend DJ Disciple to celebrating keys events with friends such as North London’s DJ Spoony (Dreem Teem) as well as the Carnival house kings KCC & the Rocking Crew. Its cool vibe and great music have seen it grow hugely from its original home of The Driver in Kings Cross to Old Street’s intimate space, Nomad as well as West London’s Westbank Gallery. With recent events at Studio 9294 and Bar 90 in Hackney Wick and now at Egg LDN, there’s never been a better time to come and cut some shapes with them :-)